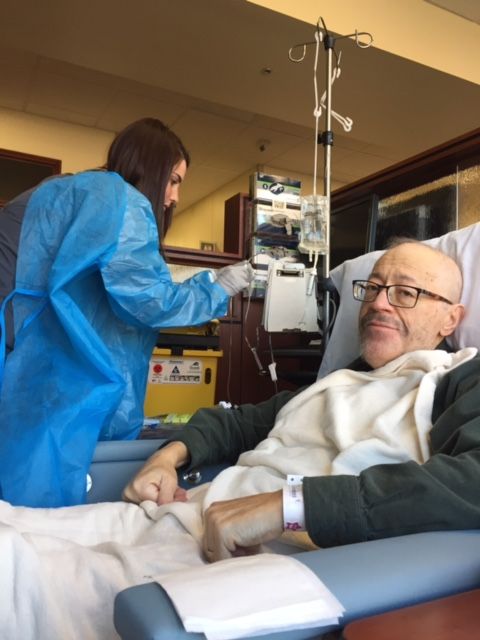 I’m experiencing a cascade of images and emotions after our first full day of outpatient chemotherapy.

To start, we are directed to the “Infusion Therapy Center” for treatment. What a euphemism! It sounds like some luxurious spa with aromatherapy wafting through the air and quiet music playing in the background. Instead it is filled with people, all kinds of people, from the truly aged, to several prisoners, to people who look far too young to be enduring such an assault. And though the hospital has done everything they can to make chemo as pleasant as possible, it’s still a matter of poisoning bodies in order to save them. The place is packed!

Second, every appointment takes much longer than we think it’s going to take. Our one hour appointment stretches into over 4 hours today pushing several other things that need to be done into the busy afternoon. We aren’t prepared for this and we end up eating awful hospital food to fill the voids of stomach and heart that well up in such a place.

Michael also receives a new poison today, a drug called Cytoxan, and at least it has “toxin” in its name. It’s the only honestly named drug he’s gotten so far. We aren’t expecting this since we’d been told that it would come next week and that it would be on its own. Now it’s combined with the other chemo drugs and we are at the mercy of a system that changes rapidly and without explanation.

We ask for clarification and receive our new schedule for weekly chemo for the next year. I’m still wondering if the changes are due to the fact that Michael’s bone marrow aspiration from last week continues to show 3% abnormal cell activity. Though we’d been hoping for 0%, the doctor didn’t seem concerned. He said that Amyloidosis responds more slowly than other types of problems. Regardless, the initial regimen we were told about has changed and it leaves me wondering why.

It’s also weird the way the chemo drugs are delivered. There’s a check and double-check and triple-check system in place which is probably all to the good. But then, the nurse gowns up and puts on gloves and a mask just to hang the highly packaged drug on the IV stand. Michael makes a comment about how “this could shake one’s confidence” and the nurse says that as long as it goes into his vein and nowhere else, it’s fine. In other words, as long as the toxin doesn’t squirt out onto anyone else and stays in my dear husband’s veins, it’s fine because it’s only poisoning him.

We overhear an old woman being pushed in a wheelchair by an old man as they come to say goodbye to the nursing staff. She says, “Well, I’m 80 years old and my tumor has gotten bigger. I’m just not going to fight it anymore. I’ve fought the good fight and now I’m stopping.” Clearly, she is meaning that she has decided to die. The nurses really don’t know what to say and opt for soothing things, wishing her well, and avoiding any talk of death or dying.

It leaves me to pondering what one says when faced with a person who has decided to die? I want to say something like, “good for you.” If I knew her I would ask her how she’s feeling about her decision, but I don’t know her, and it would be odd. Her husband stands stoically by, uncomfortable and silent, while Michael and I sit nearby in our little cubicle struck by the stark honesty, boldness, and grace of her decision.

I’m finding that this aggressive language of cancer with its war-like metaphors has never sat comfortably in my soul. So, after the woman leaves, I ask Michael if he feels he is “fighting” for his life. Michael says that it doesn’t feel like it’s a battle to him. He’s making an “effort” but it’s more of a “passage between one stage and whatever comes next.” In other words, neither of us has an adequate way of talking about this process. It’s not a war, it’s something far more mysterious and unnameable. There’s an acceptance of the reality and an intention to live a longer life, but there’s also an acceptance that it simply might not work.

So here we are. Whether we say it directly or not, Michael is facing the possibility of his death, and he is unafraid. And, really, I hope I’m facing into the possibility of my own death. In fact, it’s not even a possibility for any of us. It’s an absolute certainty, and so often we don’t really speak this way. We allow our egos to avoid and temporize and deny, as if Michael may be dying, but we are not. It is such a human thing to do.

People visit and tell Michael how good he’s looking, and I suppose he is looking good for someone who’s being poisoned. But really, I look at him and it breaks my heart. His body is going through hell and I can see the hell in his eyes, his skin, and his wasted muscles.

And then I look at his spirit and it is strong and vibrant and filled with light. Perhaps this is the stark contrast that any awake person experiences as the body begins to die – the contrast of body and spirit – one in decline while the other reaches toward infinity.