No matter when it happens, Michael is on his way to a good death in which he is loved and cared for and spiritually awake. 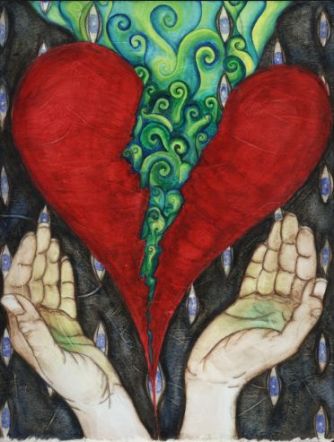 We got Michael’s new numbers three days ago and they aren’t looking good. They’re about the same as last month’s numbers which are still far outside of the normal range. In effect it looks as if the current treatment regimen isn’t doing what it is supposed to do. This is a blow I literally feel in my gut and my heart – things just aren’t getting better.

Our cheerful new Indian doctor tells us he wants Michael on the same protocol for another year. I can’t stop myself and I say, “Another year?!!” He immediately backs off to another 6 months – and I mentally thank god that he’s amenable to negotiation. But even another 6 months of this treatment that isn’t working seems absurd to me and I begin to say so, “What’s the point of continuing to pursue a treatment that appears to have plateaued?” He hears this and he shakes his head and he says, “You are right! It does not make sense.”

Then Michael says the magic words. He says, “We are healthcare professionals and we understand the protocols you are operating under.” Our doctor immediately relaxes and smiles. We are healthcare professionals. We understand. Suddenly the whole scenario becomes one human being talking with other human beings. It is such a relief! He tells us, “You can ask me anything and I will tell you the truth.” So now we really get down to business.

The doctor wants Michael to stay on the current protocol for another month. If there are still no substantial changes then he will change one of the medications for another one that is in the same class of drugs for two months. If that doesn’t make a difference, we go to the last real option – a drug that has been very effective for amyloidosis treatment. Of course I am wondering why we didn’t go to this drug long ago but the doctor tells us it’s really the option that they like to “save for last.”

The other reality is that insurance won’t pay for this drug unless Michael has “failed” the other protocols. It’s ridiculous. Our bill is already way over $800,000. I mean, how much money could have gotten “saved” by following this plan? Thankfully, Medicare has paid the bulk of this or there literally would be no way that we could continue with any kind of treatment.

We leave the doctor to go for the chemotherapy appointment feeling that we’ve made some kind of progress, though I’m not really sure what it is. Still, both of us are feeling a bit lighter. Once we’re in the chemo suite Michael says, “You know, in spite of everything, I’m still feeling positive.”

I look at him, not wanting to cry, and I say, “At this point, I’m just struggling to stay neutral,” and I turn away before he can see how much emotion is behind this statement. I really don’t want to rain on his parade, such as it is, but I have to tell the truth.

Then he says, “I’m actually pretty happy, you know. I’m doing OK,” and I believe him. I remember a conversation with one of my sons who said he thinks it’s easier for the one who is dying than it is for those who are left behind. At the time I agreed with him, and in many instances, I still do. No matter when it happens, Michael is on his way to a good death in which he is loved and cared for and spiritually awake.

I’ve been noticing lately that there are two Michaels obviously in play now – the mortal and the immortal, one facing toward life, the other facing toward death. It’s quite interesting because they can both show up within a few moments of each other, even within the same sentence sometimes. The immortal Michael is absolutely ready for death. He knows it’s coming, he’s not afraid, and in some way, he welcomes it. He knows that to be conscious without a body is one of the most beautiful of gifts.

The mortal Michael staunchly, stoically, and fiercely clings to life. He says he still loves life, he’s feeling optimistic about his prognosis, and he’s not really suffering except physically. Now sentences begin with, “ I’m really tired and it’s feeling hard to go on today, but I’m also really fine.” And both of these things are true.

As we sit for the long wait for the chemotherapy to be delivered, we talk about the new numbers. Michael’s kidney function is normal. This is good news because it means that for whatever reason, the amyloids are not being deposited in his kidneys and probably he won’t need dialysis. I say that I’m guessing it’s his heart that is taking the brunt of the deposits and he agrees. But he says that even that is good because it would mean a quick death – a heart attack.

My gut gets queasy, and a feeling of dizziness overtakes me. I excuse myself to go for a walk. A heart attack is “good.” I understand what he’s saying but what sort of a situation are we in that makes a heart attack good? I’m trying to take this in and I go outside to the small garden that is beyond the chemo area. I need a place to sit, a quiet place, and of course these places are very hard to come by at this huge hospital. I walk the length of the tall black fence that lines the garden only to find that there is a strong lock on the gate that leads to benches and plantings and some semblance of peace. Oh well. I continue walking until I find a tree in this barren place, one of the few, that I can sit under to feel the ground again.

I sit on the earth more deeply now and meditate in order to still the torrent of emotions within. “Here is the truth,” I hear myself say, “My husband is seriously ill and so far, not really getting better. Sink into the earth. Accept this hard truth. Just feel it, allow it in fully. Let it be.” It’s amazing to me how often this is the lesson in life, in any situation in life – just learning to accept reality exactly as it is.

Of course this is much easier said than done. I can point to other losses in my life – my father’s death at an early age, my divorce, my children leaving home, a few good friends who have gone in other directions – all of this has hurt. And now it feels like all of these losses have been leading to this one. This is the deep grief of life, the loss of loved ones, the loss of our own life, the deepest sorrows. And all of us must face it in some way or another.

But there is also a raw intensity of beauty in all of this. There is the potent and insistent knowing that life is ephemeral, passes quickly, and is gone. Death reminds us that connection to others is the One True Thing. And the truly appalling thing is that we all know this! We’ve all lost someone and we know the aching emptiness of that loss and yet, somehow, we forget. Over and over, we forget death’s lesson.

As I continue to sit I hear a voice from my innermost being, “Open wide to all of it,” it says. “Let your heart be broken so deeply that it will never close again. This is the greatest gift of death. Receive it now, receive it with your entire being. Allow yourself to be broken open all the way, and always, always be guided by love.”