As far as I know, there have been three miracles around Michael’s death.

How does one remember a love so long and true? How can I speak of my love without falling apart, without being down on my knees, without knowing that any words I could ever speak would be inadequate and pale beside the reality?

As far as I know, there have been three miracles around Michael’s death. The first miracle is that I haven’t had a single migraine headache since the day he died, and I’ve had severe migraines for 25 years. In what is certainly the most difficult time of my life, I haven’t had headaches. I believe that Michael took the underlying pattern of my headaches with him when he left. It was his parting gift to me.

Michael was a deeply spiritual man. In fact, our first real conversation outside of work-related things was about our shared excitement over the Seth books and the underlying reality they revealed. We agreed that we both knew that Seth was revealing the Truth. We knew we were being taught the meaning of life and of death. And we knew that few others shared our passion for this spiritual work. I had already loved his earthy quick dry wit, but now something else emerged. I realized I had found a like-minded soul.

When Michael died, we’d been together for almost 35 years, and we’d known that we were soul mates. When we met, both of us were coming out of relationships that had scarred us, and we were wary. Well, actually, I was wary. Michael already knew we were supposed to be together. In fact, he said that he’d known it on the day we met more than a year before this. All I had known was that this man was interesting, smart, and really funny. And I wanted more.

Through fits and starts we found our way to each other and were married. It was weird for me. I’d always ridden on passion, and though there was a kind of passion, this was a quiet and calm steadiness that continually surprised me. This was a passion that I didn’t understand. This was Michael.

We raised three good boys into three good men together. We hear so many stories of children so damaged by divorce that their lives are shattered. And though there was surely damage, all three of these boys grew into good men, and to a large extent, I believe that this is because of Michael, because of the kind of man he was, the kind of model he was.

Michael was so amazing that without a word from me, he knew how to be with my children. He knew how to play with them, how to make fun out of He Man figures and legos, how to soothe a frightened child, how to calm an angry one. He was a miracle right from the start.

And saying that, it took me awhile to realize what a real miracle he was – for we could talk about anything that arose between us. Granted, it was always me bringing things up, but when I did, he’d go there with me – through all the highs and lows, he never wavered. His patience with my moods, my quicksilver gyrations, my endless questioning became the balm for my soul. I, in turn, became the language of his heart.

He was also brilliant. His knowledge of esoterica and his ability to integrate genuinely difficult information into workable and practical experience was more developed than anyone else’s I’ve ever met.

It was his brilliance and his inspiration that initiated Eastwind School into being. It was mine that engendered Eastwind Healing Center. Neither of us could have done it alone. It was the alchemy of our marriage, the balance of spirit and heart, the magic of true love, that allowed the first integrative medicine center in Iowa to be born. It was here that we learned the language of teaching in the highest sense that allowed so many to be touched by our work together.

Michael was the most spiritually devoted man I’ve ever known. He literally spent his entire adult life studying and practicing various systems of self development. He started with TM at age 19, then went to Seth, then to the Kabbalah, then to The Tree of Life, then to Western magical traditions. Along the way he also studied Tibetan Buddhism, Reiki, energy healing, Chinese medicine, and various other esoteric healing methods. He was literally the most learnèd man I’ve ever known in the integration of strange magic. His whole adult life was spent in the quest for enlightenment.

In December of 2015 we were initiated into the meditational practice of Light and Sound. Four months later, on April 12, 2016 he realized his essential nature, became enlightened, and was forever changed. I do not say this lightly. This was the real thing and it was evident in the deepening calm and presence around him, a presence that pervaded even the most extreme physical difficulties.

At that time, though we didn’t have the diagnosis, he was already suffering from the disease that killed him. Once he was diagnosed and quit working as a psychologist and a healer, he struggled to find some purpose that would fulfill him. He never really found one. In many ways I think that his enlightenment was his purpose, and it is what allowed him to die. He’d done what he set out to do, and really, there wasn’t anything more that he needed from this life.

We called a psychic who we’d relied on through the years for wisdom and guidance. She told him that he would die within two years unless he learned to receive. She kept saying that: “You must learn to receive, you must learn to receive.” She said he had been a healer in many lifetimes, and that in all of those lifetimes he had given more than he’d received, and in that process, he’d created an imbalance that required adjustment. She said that the final learning of this lifetime was to open his heart to receive love from others, not just from me, but from all the many who were willing to give it in ways both small and large. 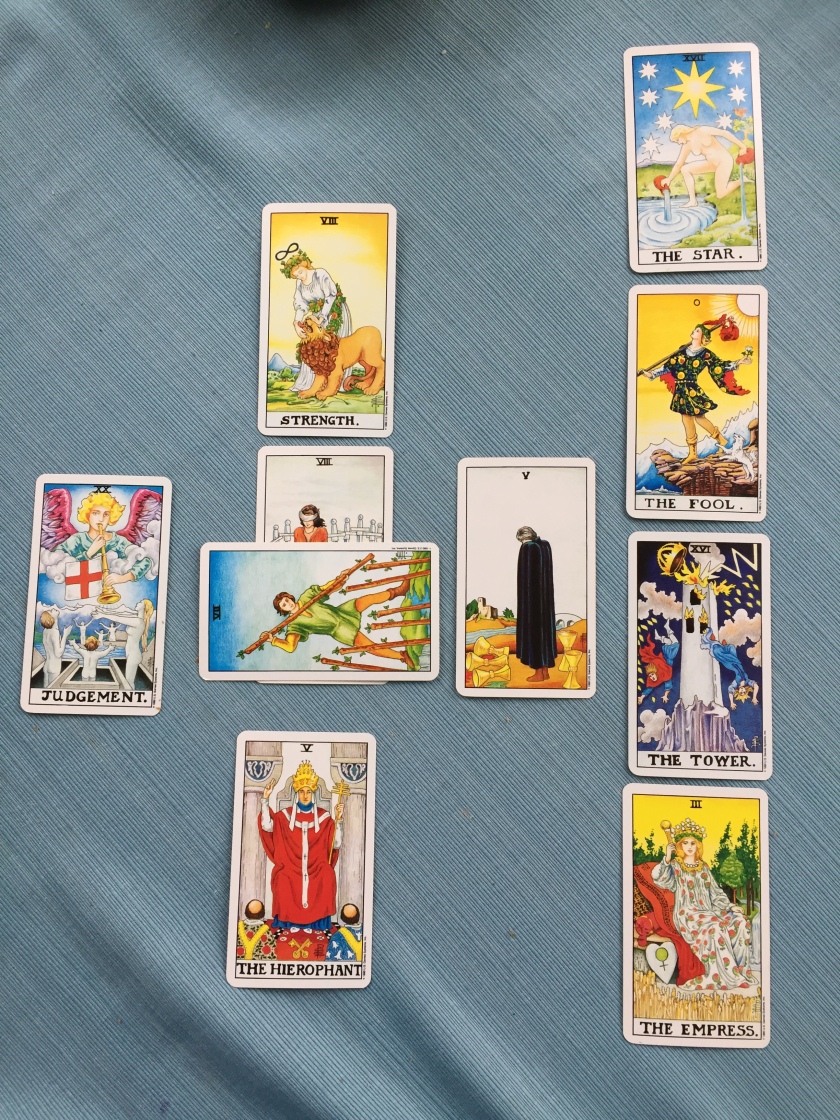 While he was in the hospital this last month, I did a tarot card reading on the course of his illness. There were 7 major arcana in this reading which is a very strong indicator that one is now in the hands of Fate with little to no ability to control the outcome. In this reading, the outcome card was The Star — the card of transcendence. When I looked at the reading, I knew he was dying soon. I also knew that when the Tower’s lightning bolt struck, Michael was held in the lap of the Great Mother (the Empress). It was clear that he would move into a state of trust and peace (the Fool) that would lead to The Star.

Five days before he died, Michael said that he realized that all the things that involved dying were easily falling into place, while the things that involved living, were not. I don’t think he believed he would be dead within five days, but he did see that death was coming. He had heard his body’s spirit telling him it couldn’t go on much longer, and he accepted it’s message.

He began to cry more easily than he ever had, and this was a man who almost never cried. He cried when people brought food to our door, he cried when friends dropped in for a short visit, he cried over the kindness of the Hospice team, he cried when his son helped him brush his teeth, he cried after meditating because he was so full of love that he was ecstatic and grateful.

I believe that in the end he did learn to receive. He was bedridden and absolutely reliant on others for his care, and his dear spirit became even gentler, even more loving. He started calling me “my love.” “My love, would you be able to get me another drink?” “Thank you, my love.” He’d never done that before and I knew that in his absolute reliance on others for help, he was experiencing a depth of receiving he hadn’t previously realized.

On April 25th, he woke me up at 3:30 am. This was the second miracle. I had put on sound-deafening headphones because of a barking dog in our neighborhood. I’d also taken a sleeping pill out of sheer exhaustion and a profound need for sleep. Though there was no physical way that he could have aroused me, I “heard” him calling me and I awakened.

I rushed into the living room to find him gasping for breath and demonstrating what I now know is a “death rattle” – his body so full of fluid that he could barely breathe or speak. He was physically in great distress. I hooked him up to oxygen but it didn’t help. Then I started to do energy work around his crown and 3rdeye and heart, particularly his crown, opening it so that his spirit could fly out easily. At this point tears were flowing down my face and falling on his bald head. I kept saying, “I love you so much, I love you so much.” With his last gasp he said, “…love…you.” His eyes rolled up to the top of his head, there was one last shudder, his eyes rolled down, and he was gone. Our last words were words of nothing but love.

When he died I felt a brief, deep shock, and then, suddenly, I was very, very calm. A peace came over me and I meditated and sat with his body by myself until Hospice came and then my brother and his wife awakened.

My brother’s wife came into the living room where Michael’s body was laid and said she had a headache. She said it was a weird headache in that she was seeing stars. I said it sounded like it could be the aura that precedes a migraine. I asked her if she wanted some medication but she said it didn’t really hurt.

And here is the third miracle: On their way back to Colorado, my sister-in-law told my brother that she’d realized that the only time she saw stars was when she was looking at Michael’s body. Clearly, he was sending us all a message.

The peace of Michael’s death has remained in our home. I am in deep grief, but there is a level of stillness that wasn’t here before. I know he went to the Stars.  Finally, he has found his way back home.